This month has already seen a number of announcements of potential interest to EMOB readers including Gale-Cengage’s announcements that will it offer STEM e-books from Springer and Elsevier (a potentially potent nexus of publishing forces in the subscription database world) as part of its Gale Virtual Reference Library (GVRL) and that it is launching a Proprietary Monograph Publishing Program; free access in March to Orlando: Women’s Writing Online that Anna announced here a few days ago; and a note we received from Dr. Ian Christie-Miller about digital imaging resources he has been developing and the interest it has received in the UK.

Just this week the Folger announced that all 38 of its digital texts of Shakespeare’s plays are now available, free of charge, online. As the homepage’s title Timeless Texts, Cutting-Edge Code suggests, a key feature of these texts is the robust coding that one can freely download… 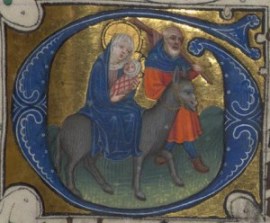 A few weeks ago, we were cruising through the desert in New Mexico. Now we’ll leave the cacti behind and spend some time in the great plains and big sky of Texas. Full disclosure: my great-grandparents settled in Texas in the late nineteenth century and my grandparents and mother were born there, so I’m practically a native.

This week, I’m going to get off the virtual superhighway to share a discovery. Digital publication seems appropriate given that most of this work was conducted using online resources and images, making this a great case study for digital humanities research and the newly-christened field of „digital fragmentology.”

I wear many hats at the moment: Acting Executive Director of the Medieval Academy of America, blogger, professor of library science, and medieval manuscript consultant. In the latter role, I have for some months been cataloguing the manuscripts belonging to the Five Colleges consortium of Western Massachusetts (Amherst, Hampshire, Mt. Holyoke, Smith, and the University of Massachusetts – Amherst). Smith and U. Mass. each happen to own one of the leaf collections compiled by Otto Ege titled „Fifty Original Leaves of Medieval Manuscripts”  (if you need to be brought up to speed, take a look at my Ege…